The Burning Man principles are a great guideline to which our Burner Community functions. They are also widely interpretable to each individual. South Africa-burner Nicol, whois been to AfrikaBurn 4 times and is coming to the Sheep for the first time this year, has the following take on the principles:

People intrigued by the notion of Burning Man often ask me “What is it like there?” My answers to this question usually involve me telling some whacky story from AfrikaBurn. Like the time 1,500 of us sat in a continuous chain to create an aerial photograph of Nelson Mandela’s face, or witnessing with awe and wonder the completely silent burning of the three-story high butterfly temple, or the night I danced and stargazed with a kangaroo and a Yeti.

Those were some spectacular experiences! Yet each isolated story can simply not encapsulate the truest essence of a Burning Man event. 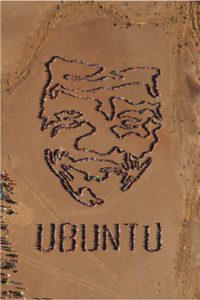 I have been lucky enough to attend and participate in four Burning Man regional events. Each year I experienced brand new feelings, met fabulously different humans and witnessed fresh creativity in artistic expression.

And yet, each year’s event had a distinctly ‘burn feel’ to it. What is that? Burning Man regional events (which take place in many countries across the world) manage to create a space unlike any music festival, art event or artistic collaboration I have encountered elsewhere.

Amidst the ocean of the unexpected at a regional Burn, I believe the ever-present keystone feature is the Ten Principles.

What on earth are the Ten Principles?

They really help tie the event together. The Ten Principles are the beliefs and values that cement the community as a loving unit. They are the overarching guidelines, each one contributing to and consolidating the Burning Man vision.

They are also super useful when trying to understand the spirit and the day-to-day life as it is experienced there. The hope is, with the knowledge of the guiding philosophy, individuals contributing to the event do so in such a way that they embody and are inspired by the Principles.

The Principles also have the crucial function to ground us a bit. They are the construct in place to bring us squarely to earth amidst our floaty surreal burning dream experience.

What are the Ten Principles not?

Not to be confused with the Ten Commandments (kindly refer to the Bible for more on those), the Ten Principles are not commands, nor demands. They’re not even requests.

While it is encouraged that burners consciously follow the guiding Principles, it is not expected to do so blindly and without an enquiring mind. Thought and contemplation is critical to the physical act of living the Principles.

They are also by no means a replacement for any individual’s existing belief system. Neither are they an exhaustive to-do list of the real world.

Here’s a shortish synopsis on each of the guiding Principles:

Radical Self-Expression
encourages you to become comfortable with your true character and to physically express this in whichever way it pleases you. You might want to construct an intricate labyrinth out of seashells, or teach willing participants your daring disco dance moves, or spend a day donning nothing but sparkly nipple tassels. This leans into the Principle of Radical Self-Reliance, which encourages you to function independently while unearthing what lies at your core in the process. 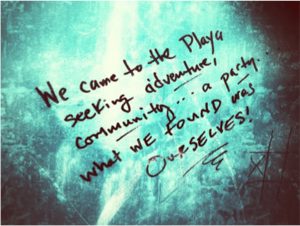 Immediacy promotes instant connection to yourself, as well as the people and environment in which you exist. It aims to eliminate any barrier, which may hinder the bridging of this gap.

Radical Inclusion conjures up a mental image of an open-armed, warmly smiling and widely welcoming atmosphere ushering in anyone and everyone who wants to be a part of this whole.

A Gifting community, not a trade economy, is perhaps my favorite Principle. Generosity of spirit coupled with zero expectations make the act of gifting so refreshingly unexpected and deeply connecting. Having no use for your wallet for four solid days is a real treat and provides a proper break from reality. For this, you can thank the Decommodification Principle.

“Everyone is invited to work. Everyone is invited to play.” Larry Harvey wrote these words to demonstrate the Principle of Participation. I completed a volunteer shift at an AfrikaBurn event in a team of one American, one Brazilian, one Dutchy and one South African. We kept burners informed from the ‘Info’ centre and rewarded volunteers with memorable trinkets for completing shifts, while we happily chatted and snacked on fizzers and strawberries. Similarly, Civic Responsibility extends beyond the individual and encompasses the welfare of the entire community. Communal Effort also strives to consolidate and collaborate for the benefit of the greater network.

The Principle of Leave No Trace means that the environment should be left in an equal or (ideally) better state than that in which you found it. Matter Out Of Place (MOOP) is not tolerated at Burning Man events. This literally means you will need to collect every feather that has floated from your boa and every grain of glitter that has accidentally sprinkled outside your tent.

Have a look here for a sneak peek at which of the Ten Principles some of the theme camps at Burning Man Netherlands 2018 plan to implement in their camps this year.

Each of the Ten Principles brings something to the table. Each one has its place and its role. Some overlap, some contradict, some are more evident than others. Yet they are all pivotal to Burning Man as a concept.

Larry Harvey’s creation lives on and lives strong. For this, we are eternally grateful and (in equal measure) excited for the upcoming Burning Man Netherlands event to see these values in play. #thanksLarry

“Within a community that is so often resistant to any form of central authority, the Principles were met with universal acceptance.”

– Larry Harvey (after writing the Ten Principles in 2004)